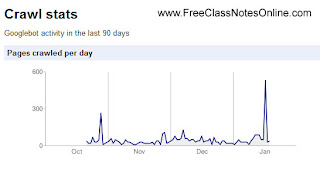 In the last 90 day, with most of the forth quarter of 2009 represented, I just posted my crawl stats from Google’s webmasters tools. It’s showing I currently have 234 indexed pages, with a total of 572 pages submitted. What was nice to see, is last week the spiders re-crawled my entire site as shown in the spike mid January. The good news, the site is growing. Yea for me. I did however have issues with linking to the index page rather then using the web http address which may have caused some indexing and ranking issues but I’ll dive more into that in the near future. Just count that up to another oops issue I’ve made. It does seem I do things often the wrong way first, and then I finally figure them out, but that’s all the learning process, right? But for now, here’s the page crawled per day statistics in the graphic for the site.

www.freeclassnotesonline.com
Posted by Brian at 3:14 PM No comments:

With Superbowl 2010 almost upon us, that being here in the US, it’s a reminder of a blog entry I made two years ago during the 2008 Super Bowl. While watching the game, I overheard one of the advertisers say that the commercials would be reposted on MySpace. My original post I included below and wow talk about timing. Over the next three hours after making this small post, my blog traffic spiked. So the right content and the right timing is key. Maybe this year I’ll see if I can pop up another post just to see if I can catch peoples attention again; who knows, maybe Twitter will overtake it this time.

Ok, talk about a marketing plug. Apparently, MySpace is getting people to their site by advertising the replay of all the Super Bowl Commercials on their site at www.myspace.com/superbowl I can just see the FaceBook marketing department scrambling right now! Oh and let’s not overlook Barack Obama's post half time show ad. 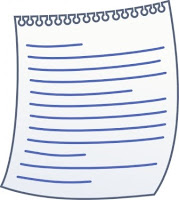 Knol, Google’s publishing forum described as A Unit of Knowledge provides an open source for content generators like me to post articles of just about anything. Over the past few weeks I wrote two articles, one dealing with electrical resistance and the other a Google search engine algorithm theory of mine. Knol also provides user to validate their name, but this is a feature that only is available to US based authors for the moment. I added Google Adsense and Google Analytics data tracking to my Knol profile as well. I’m not sure how much traffic this will generate but who knows; if I can share some ideas on there, why not its fun.

For links to my articles:
1) Electrical Resistance and Resistor Element Fundamentals
2) Google Hates Numbers
Posted by Brian at 2:50 PM No comments: 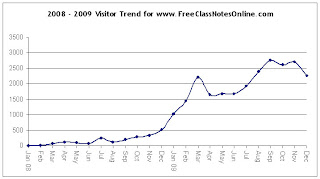 I just posted my year end visitor count for both 2008 and 2009 for my site, Free Class Notes Online. Note, the former site classnotes123 was converted over the last half of 2009 which caused a drop in visitors as I had one site going online with the other being pulled down. You can see this in April through June numbers, i.e. flat line growth. I also made as many mistakes as one could but hey, it’s all a learning process, right. Many changes I made throughout the year were putting most of my scripting in .php format so I can easily make updates to my pages. I’m not sure if this helps or hurts me in the search engines; if anyone knows if a .html is more weighted then a .php please let me know.

I also converted over all my pages to XHTML 1.0 during this time and I’m starting to go through the process of indexing many of my supporting graphics pages. I’ll tell you all why in a follow on post; I think I’m onto something here. But for now the numbers are for 2009 I had 24,301 total visitors for the year.

Have a happy and prosperous New Year. Cheers -Brian
Posted by Brian at 10:59 AM No comments:

Seneea.com News Feeds blog is an interactive RSS channel feed, that offers news updates about the company sites, and provides an interactive forum for questions and feedback from all of you.